On Thursday, June 22nd, 2017 at the Guelph Chamber annual Awards of Excellence,  Schema App was awarded Startup of the Year by Innovation Guelph.

Schema App is software as a service that helps digital marketers translate websites into the language of search engines, resulting in better organic search results and rich snippets, such as stars and images, for higher click through rates and more sales.

The Awards of Excellence event is Guelph, Ontario’s dedicated evening to award local businesses, volunteers, and community members for their achievements and community contribution. Innovation Guelph presents two awards each year, one for Start-Up of the Year and one to Small-to-Medium sized Enterprise of the Year.   The Startup of the Year award is given to an Innovation Guelph client who has notable achievement in the past year in the areas of product launch, revenue, new jobs, cost savings. Schema App has done all four! Schema App was selected amongst all the Innovation Guelph clients as the startup of the year.

“We are honored to be recognized for our hard work and company’s achievement. Innovation Guelph and the Guelph community have played a significant role in supporting us in our journey, thank you for the mentoring, business and support ” says Martha van Berkel, Co-Founder of Schema App.

Schema App has had an amazing Q1 and Q2 of 2017. In March, Schema App was selected as one of eight Fierce Founders (women tech founders) to participate in Communitech’s Fierce Founders Accelerator and was selected to attend Venture Out Market Accelerator in New York City.  Over the last two months, Schema App has increased their software revenue by 88%,  released two new products, a started working with more Enterprise accounts. When asked why they built Schema App, Mark van Berkel said:

“We were working with small and medium businesses in Guelph doing search engine optimization
(SEO). We wanted to do this new advanced type of SEO, namely schema markup, but found that doing it manually was not profitable.  So we built Schema App to enable us to do schema markup profitably. Since we got so much value using our own tools, we released it to the public. Now digital marketers around the world use Schema App to do schema markup at scale,  with profit.” 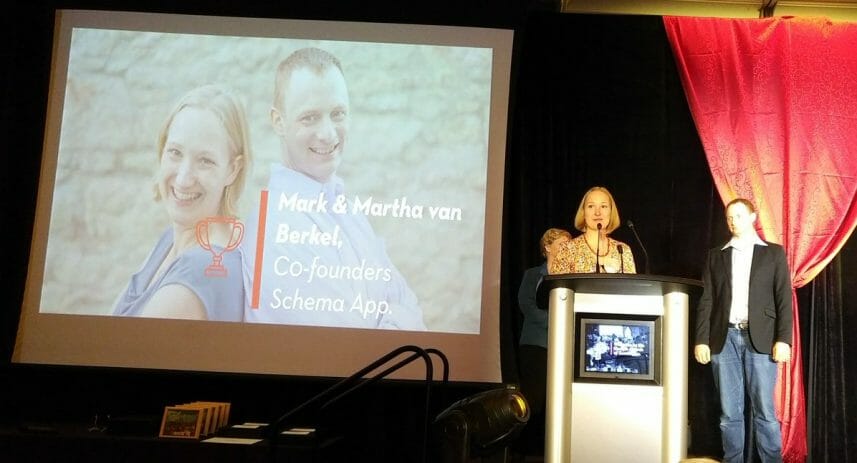 Martha van Berkel thanking Innovation Guelph and its mentors for the Startup of the Year Award.

Since the inception of Schema App, we’ve helped customers like SAP and Keen Footwear to reach their online business goals through customized schema strategies.

Are you ready to unleash the power of structured data?

Martha is the CEO and co-founder of Schema App. Schema App is an end-to-end Schema Markup solution that helps enterprise SEO teams create, deploy and manage Schema Markup to stand out in search. She is an active member of the search engine optimization community, and the work that she does through Schema App is helping brands from all over the world improve their organic search performance.

Welcome to the Schema App Blog. Learn more about how schema markup can help you take control of how your brand shows up in search and drive more quality organic search traffic to your website.